Musical artists ranging from Nichole Scherzinger to Snoop Dogg to LMFAO quickly claimed Loyal Studios as an amazing place to shoot their music videos.  The rhythmic legacy continues with the popular rock band, “NeverShoutNever” heating up the Burbank, CA stage for their new album, “Time Travel” — set to drop September 20th,2011.   Loyal Studios and Bob Bekian co-produced the latest music video for the crew of “Never Shout Never” –Christofer Drew, Caleb Denison, Taylor MacFee, and Hayden Kaises –and provided the venue as well as the technical support and equipment to facilitate the production. 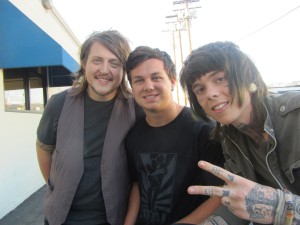 “The shot list included converting our digital stage to a time machine, complete with electrical props and rear-projection effects,” Bekian states.  “We produced the video using our in-house playback system, and a combination of Canon 7D’s and 5D camera systems.”  The lenses used included a 70-200, and a set of compact primes.  Lucas Huffman managed the set while the band took up residence jamming around a corkscrew, Doc-Brown-inspired, Time Machine Prop.

“This band is destined for greatness,” Bekian comments.  “They demonstrated a very consistent  professionalism and talent that is refreshing in today’s music world”

“Never Shout Never” is originally from Joplin, Missouri, and formed in 2005 with ChristoferDrew Ingle at the lead.  The group made a name for themselves on Myspace which led to an appearance on TRL, and a tour

Bob Bekian with the Time Machine in the "NeverShoutNever" music video at http://www.loyalstudios.tv

“Never Shout Never” and is currently on the road for their “Time Machine Tour” in  South America, and then a tour of Europe  to follow.

For information on Bob Bekian, go to bobbekian.com

The global army of Green Energy has gained a new celebrity in the fight to bring more energy efficient rated appliances into American homes and businesses.  This noble cause runs strongly among the Who’s-Who of Hollywood that have taken up the mantle for lowering their carbon footprint.  Who better to light up the screen with his charming white smile, and charismatic presence but John Corbett.  Best known for his role as the enigmatic Aiden Shaw on “Sex and the City,” Chris Stevens in “Northern Exposure,” and Ian Miller in “My Big Fat Greek Wedding.”  John agreed to work with the US Department of Energy (DEO) for the “Energy Star” division on a PSA.  The project focused on a contest between companies to see who can get the lowest power bill and reduce the amount of “Vampire Energy” used when equipment is left turned on or plugged into the wall.

John Corbett has given himself the right edge in Hollywood with an extensive laundry list of film and television roles blazing through a career lasting over two decades that earned him Emmy and Golden Globe nominations.   Though the busy star and country singer kept a demanding schedule for the PSA, he was upbeat, fun to work with, and signed autographs for his fans with a smile.

Loyal Studios was right there with John Corbett and the DOE to produce the shoot in our Burbank pre-lit green screen studio.  Bob Bekian–Producer and owner of Loyal Studios–was happy to open up his facility for the production. “We were thrilled to work with John and a professional Director of Photography like Stef Butler” says Bekian who coordinated the production through his Burbank facility of Loyal Studios.

Stef Butler, director of Photography hired by Colehour & Cohen, had only good things to say about the experience at Loyal Studios.   “It’s the first time I’d ever rented a studio, and I didn’t get nickled and dimed over lights, and actually had a stage manager that worked with us,” Butler says.  “He became one of the team.  That’s the first time this has happened for us in 24 years in the business.  We had an emergency, and [Loyal studios] saved our assets.”

Energy Star is a division of the US Department of Energy (DOE) that began in 1992.  The logo most everyone has seen on thousands of items from computers to heating and cooling systems (even windows) rates the amount of power devices use, and gauges how much said gadgets cost a year to run–like the MPG rating on a car.

Loyal Studios was thrilled to be able to bring the Energy Star PSA project onto our stage, and we understand how important it is to use energy intelligently and wisely.