What could be better than the Wolfman and Frankenstein terrorizing the cold starless nights?

How about these famous fiends striking fear into our hearts… and getting paid for it, too!  In a twist on life around the creatures of old Hollywood, renowned special FX make-up artists, Greg Nicotero and Howard Berger (of KNB FX Group) give the famous 1950’s Universal Monsters a different role as employees of The United Monster Talent Agency (UMTA).  The chilling personae of Dracula, the Mummy, the Wolfman, the Bride of Frankenstein, the Invisible Man and the Creature from the Black Lagoon lurk in wait for horror movie work with the headline “We’ll have our people scare your people!.”

The Creature from the Black Lagoon in make-up.

The short premiered in Fantastic Fest in Austin, Texas, late 2010.

After working with Loyal Studios president, Bob Bekian, on the hilarious, star-studded Farley Brothers comedy sketch, “Happy Birthday” (featuring Gerard Butler as a perverse leprechaun), Brett Ratner knew Loyal Studios could be an ideal partner to help film the promo for this “Monster” of a short film.  Bekian, –a life-long fan of the Universal Monsters and classic horror memorabilia collector—jumped at the chance to be the co-producer for UMTA, especially with spectacular make-up only KNB FX studios can provide.

Bob with the Creature from the Black Lagoon

Nicotero has worked in Loyal Studios several times  in the past, and his artistic genius has been applied to the casts of all of  Quentin Tarantino’s, and Robert Rodriquez’ films.  He was noted on the hit make-up reality show, “Face Off”, and more recently as the special effects make-up designer for the graphic novel-inspired zombie series, “The Walking Dead.”

“Everyone who knows me knows that I have loved the universal monsters ever since I was a kid,” says Bob Bekian, owner of Loyal Studios, and co-producer.  “I have a vast collection of original

movie posters and lobby cards, toys, and props from the classic Universal horror library.  I am also excited to be producing an exclusive interview with Julie Adams, the female Lead in “The Creature from the Black Lagoon”, in our Santa Monica stage in May.  The opportunity to work with a legend like Greg Nicotero—whom I‘ve admired in all of his work, combined with the concept for this project—was an honor, and incredibly fun to be involved with. “

KNB FX is the force behind some of Hollywood’s most memorable special effects and movies.  Greg Nicotero opened KNB FX in 1988 with long time friend, Howard Berger. Since then, he has marked his expertise on “Dances with Wolves,” “Sin City,” Transformers” and “Serenity”, “Spawn”, “The Green Mile,” “Inglorious Bastards,” “Predators,” “Splice,” “The Chronicles of Narnia,” and more than 200 credits in both make-up and special effects. 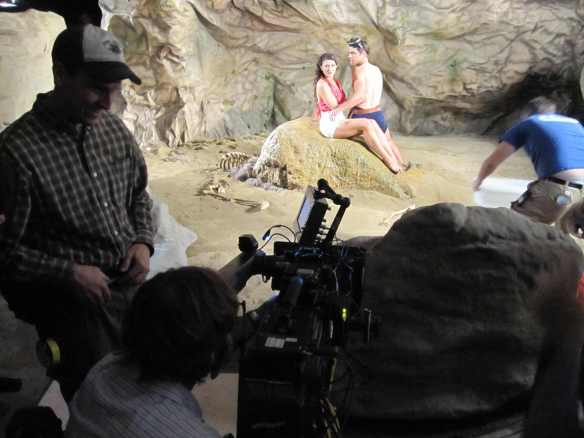 Setting up the shot with the Sony F900

Working in the popular venue of 3D has been a challenge that Greg Nicotero was eager to undertake, as is shown on the incredibly detailed “Final Desintation 3D” and “Pirahna 3D.”  Creating “The United Monster Talent Agency” let Greg go back to the Universal Monsters that inspired him in his youth to bring to life creatures from our darkest imaginations, and to throw you headfirst into the fray of explosive science fiction features.

The “United Monster Talent Agency” stars Jaremy Aiello, Bob Burns and Jeffrey Combs, and was shot on the Sony F900.

To See these monsters, click link to AMC or visit www.universalstudiomonsters.com